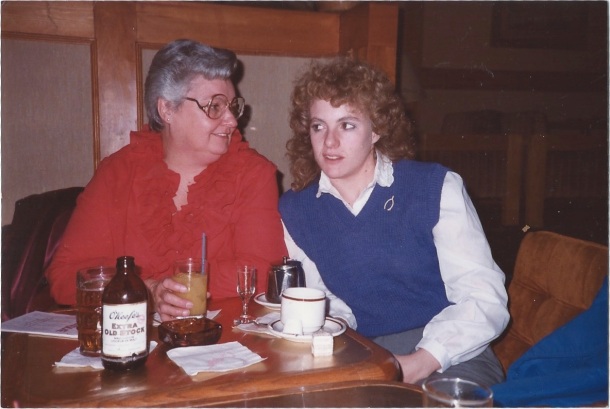 this is a picture of my mom and me. We were at some hotel bar or other in Lethbridge after opening night of Antigone, November 22, 1983. I was 21, Mom was 49. She often looked at me like this. And I often looked at her like that, too — when i was young. A mixture of love and impatience. Oh, I so took her love and protection for granted! Especially when I was young.

I remember the date because it was my birthday, my twenty-first, and i had the lead role in the play. It was the mainstage production that fall semester at the University of Lethbridge. I was still heterosexual then, engaged, even! Dad was there too, maybe Lenzes as well. They’d moved to Lethbridge by then.

Mom’s name was Edith. It’s a Germanic name, and it means “spoils of war”. She was a warrior, was Mom. She wouldn’t have claimed that, I don’t think. But she had to be anyway. She was asthmatic, and I think she had a much harder time with it than I did. Better drugs around by the time I arrived. She would have to inject herself with adrenaline when she was having an asthma attack. I think that might have caused her death eventually. That stuff’s really hard on the ol’ ticker. Once, when she was a teenager, she gave herself an injection to get herself out of a crisis and passed out. She never took it again. kept the syringe, though. I don’t know where it went, now. It was a big heavy glass and steel contraption in a velvet lined box. fancy.

When she was a girl, she wanted to grow up to be either an airline stewardess or a teacher (I think), and she wanted to have five children. She couldn’t  be a stewardess because they also had to be nurses, and definitely could not have asthma. She did become a teacher, but never got a diploma or degree, she kind of lucked into it when we lived in Red Deer and my brother and I were about 10 and 11 or so. She’d been caring for the neighbourhood kids while their moms were at work, and then she started working at a ‘Head Start’ program for pre-kindergarten aged kids. Dad was on the board of the Fairview Kindergarten Society at the time (I have no idea why, or how that came about), and Mom would often drive the founder and ruler of the kindergarten, Mrs. Ruff, to Edmonton or Calgary for meetings. Mrs. Ruff was affectionately called “The Little General” at her church. She wasn’t five feet tall, but she could fill a room, that’s for sure. She was our kindergarten teacher, and she  knew how to hold the attention of a room full of five-year-olds. Anyway, Mrs. Ruff took a shine to Mom and offered her a job as a Teacher’s Aide one year. That was it.

Mom taught for about 25 years. She had a gift with children. Like her mother, Peg Morgan, she spoke to children as she spoke to adults, and she had expectations of them. Not unrealistic expectations, but high nonetheless. It must have been from her that I first learned that people will meet the expectations you have of them, so you might just as well aim high. She wouldn’t tolerate disrespectful behaviour or bullying, but she had all the patience in the world for the children who needed some extra kindness, attention, responsibilities…

She was creative and sharp and funny, my mom. Her gifts were under-utilized, she was stunted in many ways by the ol’ patriarchy. She never thought she was very smart, although she was. She was a relentless and unrepentant punster, she was a gourmet cook, sewed the best Barbie clothes on the block, made beautiful doll furniture and stuff out of egg cartons, berry baskets and bits of twine, created cards, painted watercolours, and best of all, stood up with and for her family and friends. it’s been a year and a half since she died and I still can’t get used to speaking of her in the past tense.

But that is where she lives now, in the past. Not in Red Deer or Regina or Swift Current — she is all those places, but long ago now. I can hear her voice, and her warm full laughter. I can see her brown eyes looking at me with love, sorrow, disappointment, pride — Oh how I miss her.

I guess that’s how it’s supposed to be. You just miss your mom forever.

I don’t think anyone will miss me the way I miss her. That’s how it is.

Posted in Uncategorized. Bookmark the permalink.

My mom was Edith, my dad was John. I have a brother, who is Shawn. I have many friends and allies and mentors in my life. I'm white, over-educated, working in a field for which I am not yet trained, messy, funny, smart, lesbian, feminist "Not the fun kind", as Andrea Dworkin said. But I, like the feminists I hang with, ARE fun. Radical feminism will be the roots of our shared liberation. Rejection of sex-stereotypes (gender) and male domination will give us wings.
View all posts by easilyriled »
← Love and Accordions — variations on a theme
“Subversive Barbie” Altered Book →