RSS Feed
← A tale of now many meetings (and some other musings).
You think YOU’RE dysphoric?? I’ll give you dysphoric… →

it’s New Year’s Day. January 1st, 2018. This year it will be 30 years since i moved to Vancouver. October of 1988. Never planned to be here so long. Well, I never planned, really.  I’m still not really a ‘plan-ahead’ sort. Oh well. I’ve crashed along this way so far and what a great life I have.

Last night, Dec 31, 2017, we went down to the beach, the dog beach in far east Vancouver, near the port there. Earlier in the day, we had made the Druid-inspired dolls of sticks and strips of fabric, each with something to leave in the past year written on it, dipped in parafin, wrapped ’round the sticks. My friend Terry met me after my regular Sunday evening meeting, drove us to pick up Su, and off we went in our long underwear and puffy coats to the park.

I wrote on my strips of fabric to leave to 2017 my self-doubt, the luxury of stillness in the face of fear, and a few broken friendships. Those are the big ones for me. I don’t like goodbyes. I don’t break up with people — not friends, lovers, co-workers, enemies — not me.

Su said to me once, “you don’t like saying goodbye, do you?”

So writing down the names of friends I have loved, and setting fire to them, letting go of those relationships, that’s a big thing. They are women with whom I had good, long, sustaining friendships.  One I still count as an ally, and I love her.  We don’t understand each other, though, I think — perhaps we never have — and I betrayed her trust. She said two years ago that she didn’t want to be friends anymore. A second woman betrayed me, and made her decision to take an easier, softer path rather than trust her own instincts, or me. She was close, but decided she would not make an alliance with or commitment to feminism.  The break was sudden and harsh, but I have to leave any resentment behind. Her decision was not about me, I know she loves me in her way, but I don’t trust her now. That’s okay. And a third was stalwart beside me for a long time — she helped me grieve, and helped me lift my eyes to the horizon. She was always on a different path, though. She has different and opposing political commitments to mine. At a certain point, we could no longer be friends. We’ve never talked about it, but we’re clear with each other, i think.

I left them in 2017, these friendships, these alliances. This is not to say we will never be friends or allies again. It means, to me, that now there is space for something else. I don’t want to be burdened with resentments or unfulfilled yearning for something that never was or could be. I wish them well, as always. And as my doll burned, and the smoke went out to the ocean, I felt relief. A burden lifted.

I also burned my resentment and rage toward the boss people at my university. I want to have room for compassion for them. They’re just afraid, is all. They need me much more than I need them. But at the same time, I am dispensable — I’m just a sessional lecturer, after all. We are literally a dime a dozen. Did I tell you, speaking of that, that the dean of the faculty of education summoned me to his office in November? I couldn’t go because I was in Red Deer at the time (I have a draft blog post about that wonderful trip, I might get around to posting it), and by the time I returned, he’d decided that he’d best proceed with caution. I expect he is paying attention to the Lindsay Shepherd case at  Wilfred Laurier University. That’s a link to the whole recording, which is pretty long. You’ve probably already heard about it anyway, and know that the university apologized to Shepherd. I wish I’d recorded my meetings. My bosses said the same kinds of things to me they did to Shepherd. Shameful things, like equating my views to that of a Holocaust denier. But it’s their shame, anyway, and so not my business, really.

The dean has never told me that he no longer wants to meet. His office minions only told my Faculty Association rep when she called them. He didn’t tell me in the first place that he wanted to meet with me, either. He got his assistant guy to do that.  Apparently, late in the semester, they received more complaints. They are ‘reflecting’ according to the Faculty Relations guy, who talked to the Faculty Association woman, who told me.  I’m still rattled about all that, of course.  This blog is private now because of that whole mess, because my “superiors” have accused me of breaking the law and harming students. But I decided I’d burn that, too. There is nothing I can do about their behaviour toward me, and nothing I can do to prevent them from firing me, or from taking ‘disciplinary actions’, whatever they may be, in the future.  So I burned my rage and disappointment, and I will go forward this year to teach the best I can, and use the room I have freed up to seek new opportunities, to shore up alliances, open broader horizons. Write more, read more, start running (!), train more… And speak.

If there’s one thing I’ve learned, especially in the last four months, it’s that people want to hear and to discuss a full range of ideas about gender, feminism, sexism, racism, classism, oppression — they want to talk about it all and to figure out what they think — not only what they’re allowed to think. Way more of my students told me they appreciated having an opportunity to talk about the implications of trans ideology than complained about me. I think they protected me, too, by not bringing it up again in class. That was a shame. After all that, they didn’t — we didn’t talk much about anything contentious. We were all muffled, all semester.

It’s frightening, that speaking up thing.  I knew it, of course, it’s easy to see what happens to women who speak up. When Margaret Mitchell told the House of Commons, in May of 1982, that one in ten women in Canada were battered by their husbands, her (male) colleagues laughed at and heckled her. Never mind that Canadian men were, with impunity, beating and raping the women they had sworn to “cherish, love and protect” in marriage. When women speak, we are still met with derision and insult. As well as threats. More than 30 years later, women who speak up about sexism and racism face terrible sanctions — from ‘no-platforming’ to death threats (Anna Sarkesian, Cindy Blackstock, Julie Bindel, Lierre Keith, Germaine Greer, Meghan Murphy, Magdalen Berns, Chimimanda Achidie, to name a few) — women who speak about male violence (including prostitution), racist state policies, and gender ideology face serious consequences. I’m small potatoes, me. Not in the same league at all as the women I listed there, but scary enough, I guess, to the education faculty here. Scary enough that they will draw up ‘guidelines’ in order to silence feminist dissent. Well.

So I also burned patriarchy, prostitution, male violence against women, gender. These are structural and they will take generations to dismantle. But when i burned them, I imagined the space their absence will free up. It will be space for us to see each other.  It will be space to breathe. it will be space to imagine freedom together. All of those were part of forming the things personal to me that I burned — self-doubt, paralysis in the face of fear, those friendships, the clutter that turns me round and blocks my way. So I burned the personal and the political. I asked my ancestors to take it, to guide me toward right actions. I watched the smoke rise and the fog shroud the harbour across the bay. We stood together on the shore and felt the warmth of the flames as we let go of the stuff that holds us back. 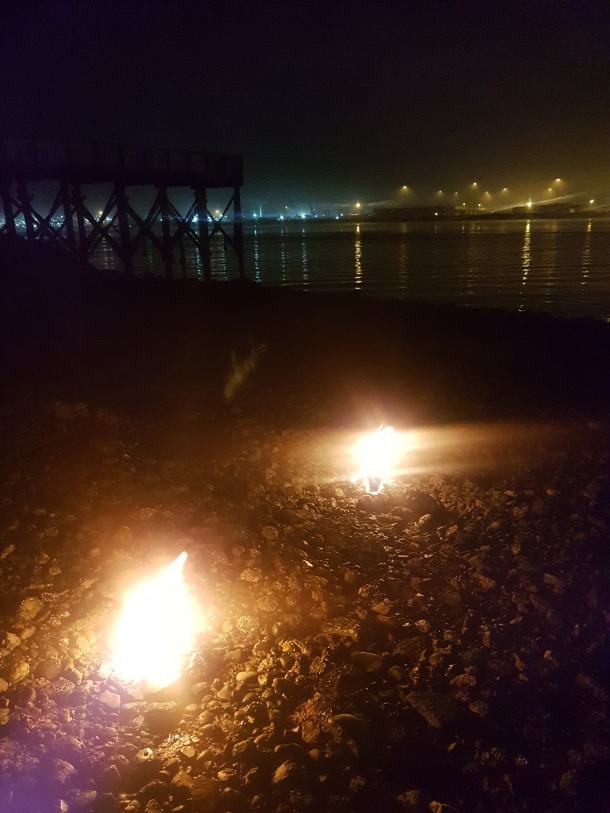 They don’t look like much, but they threw off a lot of warmth. Here’s to a Happy New Year, to all of us. May we all, in 2018, bring freedom closer.

Posted in Uncategorized. Bookmark the permalink.

My mom was Edith, my dad was John. I have a brother, who is Shawn. I have many friends and allies and mentors in my life. I'm white, over-educated, working in a field for which I am not yet trained, messy, funny, smart, lesbian, feminist "Not the fun kind", as Andrea Dworkin said. But I, like the feminists I hang with, ARE fun. Radical feminism will be the roots of our shared liberation. Rejection of sex-stereotypes (gender) and male domination will give us wings.
View all posts by easilyriled »
← A tale of now many meetings (and some other musings).
You think YOU’RE dysphoric?? I’ll give you dysphoric… →